Part of the original concept of Malba was that in due course it should become a self-governing community, so far as its local affairs were concerned. With this end in mind, the Malba Association was incorporated on February 18, 1908, and its Charter approved by the Supreme Court. Its purpose was to "promote the mutual comfort and convenience of its members and to provide generally for the care, protection, maintenance and improvement of property at Malba of its members, and to promote social intercourse among its members." A few years after the Association was formed, the Malba Land Co. conveyed to the Malba Association its title to the beach and to the streets and eventually turned over the control of the community development program to the members of the Malba Association. Road maintenance for Malba streets was obtained through personal contacts with responsible city officials in the Queens County Borough President's office. Eventually maintenance was taken from the individual boroughs and centralized in one city department servicing all five boroughs.

The Malba Association Board is composed of eleven volunteers. A nominating committee chosen at the previous general annual meeting presents candidates to fill expired positions. The Malba Association members, in good standing, then vote to fill these spots and elect the president, vice president, secretary and treasurer. The Association is governed by the Malba Association by-laws and holds two regularly scheduled general assembly meetings a year in May and November. Board members usually meet monthly to discuss community developments and problems. The current presiding president is Ms. Kathleen Georgio (718-359-0226).

Past Malba Association presidents include amongst others:

All residents of Malba are REQUIRED to become members of the Malba Association or MUST pay a yearly assessment in the same amount as the dues. Dues are payable in January and checks made out to The Malba Association can be mailed to Mrs. Pauline Giudice 141-41 11 Avenue Malba, NY 11357.

Membership in the Association gives you the opportunity of sharing with your neighbors the privilege and responsibility of running this unique community. The many benefits and advantages you will enjoy are made possible only by the concerted effort of members working together to preserve what the community has today and to improve your neighborhood for an even better tomorrow. The Association dues pay for the private security guard, maintenance of the small park areas throughout Malba and the waterfront, as well as taxes for these areas. 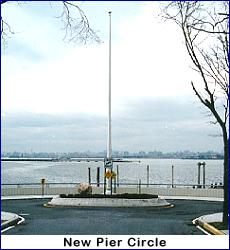 The Association has been instrumental in maintaining the appearance, well being and quality of life in Malba. In recent history it was the driving force in the construction of the new sea wall and pier circle, new sewer lines, the removal of wrecked cars and the installation of bolars around Powell's Cove, the development of a passive park, resurfacing of our streets, planting of trees, turning Parsons Boulevard into a one-way street going North, the prevention of the city bus using Eleventh Avenue while Fourteenth Avenue was under construction. It is currently trying to have speed humps and stop signs installed on 11th Avenue to slow down traffic which has been a problem. The Association was instrumental in the design along with the DOT of the new exit ramp off the Whitestone Bridge and the rerouting of commercial traffic to 20th Avenue and away from 11th Avenue. It is fighting for the installation of noise barriers along Parsons Boulevard service road. The Association zealously enforces zoning regulations to protect property values in Malba. It also maintains and restores the common areas throughout Malba and the guard house on Malba Drive.

For many years the Malba Association has employed private security to augment the city police who patrol the community. Each family who joins the Association receives a special Malba sticker for display on their front door and on their vehicles as identification.

The Malba Association works closely with Community Board 7.

The Malba Association was the driving force behind the new pier circle.